The chemical memory of seawater: scientists examine the biomolecules dissolved in the ocean and read them like a history book of the sea

Bremerhaven, 27th September 2012. Water does not forget, says Prof. Boris Koch, a chemist at the Alfred Wegener Institute for Polar and Marine Research in the Helmholtz Association. Irrespective of what happens in the sea: whether the sun shines, algae bloom or a school of dolphins swims through a marine area – everything and everyone leaves biomolecular tracks.  With the help of a combination of new techniques, Boris Koch and colleagues can now identify and retrace some of these.  In a special volume of the open access journal Biogeosciences, these scientists report on how these analyses work and which events in the sea have so far been uncovered by researchers. 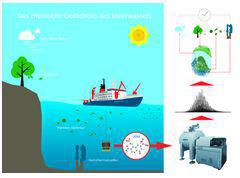 Ponds, peat holes and roadside ditches full of stagnant rainwater were previously of no interest to the chemist Boris Koch. “Then I thought: everyone knows this brown sludge; what could be interesting about it? Today we are working with these very substances that colour the water in roadside ditches brown – or expressed more precisely, with dissolved organic matter which not only occurs in ponds, but of course also in oceans,” says Boris Koch, who initiated the research project and is co-editor of the special volume.

It is true that the concentration of these so-called biomolecules per litre of water is lower in oceans than in roadside ditches. However, if we were to tip all of the seawater in the world through a biomolecular porous sieve and convert all the components contained to units of carbon, the relationship would look completely different. It is estimated that the sieve would contain around 25 billion tonnes of stored carbon. This originates primarily from the remains of dead marine organisms and also from the biomass of living whales, fish, algae, bacteria, sea grass and other marine residents.  On the other hand, some 662 billion tonnes of dissolved organic carbon would pile up under the sieve, consisting of ten thousands of various substances.

All of these substances aroused Boris Koch’s curiosity: “Our work with dissolved organic matter is accompanied by two fundamental difficulties: firstly, to this day we do not know how much organic material reaches the sea or is produced there and why not everything is biodegraded. Secondly, the concentration of individual dissolved biomolecules is so low that we must consistently enrich our water samples so as to be able to study the dissolved organic matter they contain in an ultra-high resolution mass spectrometer at the Helmholtz Zentrum München,” explains Koch, who is a co-operative professor at the Alfred Wegener Institute and Bremerhaven University and who lectures on marine chemistry.

With the help of this mass spectrometer at the Helmholtz Zentrum München, the German Research Centre for Environmental Health, the team of scientists working with Boris Koch has for the first time succeeded in identifying thousands of individual components in the dissolved organic matter (DOM) in the course of a single measurement. “The device gives us the chemical formula of each molecule and specifies how much carbon, oxygen, hydrogen or nitrogen it contains. We need this information to find out where the individual molecule might have originated from,” Boris Koch explains.

At the end of the analysis in the mass spectrometer a kind of chemical fingerprint is produced which, in the course of statistical calculation, permits concrete conclusions to be made about the water in which the dissolved organic matter once swam in. “We are just beginning our studies. However, it would appear that, using this method, we have discovered a new way of exploiting the water’s chemical memory,” says Boris Koch.  For example, scientists can say how old the dissolved matter is, whether it was exposed to strong sunlight along its path through the oceans or which bacteria and types of plankton probably once swam in the same body of water.

“We can even trace which share of the DOM leaves its tracks in the atmosphere. Foam and waves can transport DOM into the air where it has a considerable influence on climate,” adds Dr. Philippe Schmitt-Kopplin from the Institute of Ecological Chemistry at Helmholtz Zentrum München. After all, the most important questions about DOM arise from climate research. Boris Koch: “The dissolved organic matter in the ocean is one of the largest active carbon reservoirs on earth. Previously climate research paid little consideration to its storage capacity, despite the fact that it binds carbon dioxide for periods of 3000 years or more – the average age of our sample material.”

The question for scientists at the Alfred Wegener Institute is now to close these gaps in knowledge and to find out more about the role of the DOM in the global carbon cycle. The chemical analysis process could also be used in other sub-disciplines of marine research: “Oceanographers could always draw on the DOM finger print when it is not possible to distinguish water masses solely on the basis of temperature and salt content readings. Furthermore, during one of the next expeditions with the research vessel Polarstern, together with biologists we plan to examine whether the DOM in bodies of water along the migration routes of southern elephant seals demonstrates certain chemical commonalities. Perhaps we will find evidence that these marine mammals find their way using ‘water odour’”, chemist Boris Koch says.

Personally the new findings mean that he now sees every ditch in a different light. Koch: “We now know that every drop of water contains real chemical information which, thanks to new technology, we are now able to access.”

Background knowledge: What is DOM?

The organic matter is formed from atmospheric carbon dioxide by primary producers such as plants and plankton by photosynthesis. This takes place both on land (plants) and in the sea (algae). The DOM formed is either transported to the oceans via rivers or it is directly released in the seawater or sea ice, for example by algae and converted by microbial degradation. In flat coastal waters and the open sea, bacteria absorb take up part of the DOM as their most important source of organic energy. They decompose the material and break it down into its basic components. The carbon dioxide created in the process dissolves in the water and can thereby escape back into the atmosphere.

The other part of the freshly incorporated DOM is initially not broken down by bacteria, but rather chemically modified, and withstands the decomposition process for a period of up to 5000 years. This is an extremely unusual process from a chemical point of view because in principle the oxygen-rich water column should promote rapid microbial degradation of the organic material.  The two major questions are now: why are degradation processes interrupted and why does a significant part of the atmospheric carbon remain stored in the DOM of the oceans, circulating them for a long time? In this way marine DOM acts as a buffer in the organic carbon cycle.

Despite the evident major significance of DOM, until now it has been scarcely possible to classify it in the global carbon cycle. The complex composition of the DOM represented an enormous analytical challenge. Consequently, there was insufficient information about the precise sources of the DOM, the formation and degradation processes and its binding mechanisms with minerals and heavy metals.

The special volume of Biogeosciences, entitled Molecular biogeochemical provinces in the eastern Atlantic Ocean, can be accessed online at www.biogeosciences.net/special_issue95.html.

In addition to researchers from the Alfred Wegener Institute for Polar and Marine Research and the Helmholtz Zentrum München, the German Research Central for Environmental Health, significant contributions were made by scientists from the Helmholtz-Zentrum Geesthacht, Central for Materials and Coastal Research and from Virginia Commonwealth University in the US state of Richmond, Virginia.

The Alfred Wegener Institute conducts research in the Arctic, Antarctic and in the high and mid-latitude oceans. The Institute coordinates German polar research and provides important infrastructure such as the research icebreaker Polarstern and stations in the Arctic and Antarctic to the international scientific world. The Alfred Wegener Institute is one of the 18 research centres of the Helmholtz Association, the largest scientific organisation in Germany.