For clay and shale the average background content
of As is normally 10 mg/kg. Examined samples from
the Bornholm Basin, based also on the data shown by
Emelyanov and Kravtsov (2007), contain from 1 to
277 mg/kg As (see Tables 2, 3). The highest As value
(277 mg/kg) was found in the mud from “hot spot” of
the P-181 area in the Bornholm Basin, located about
500 m to the south from W.3 shipwreck.

In the mud sampled immediately near the W.1
shipwreck As concentration is 210 mg/kg (Table 4)
as mentioned above, near W.2 and W.3 shipwrecks it
is 10-30 mg/kg; near W.4 shipwreck it reaches 30-50
mg/kg. In total at the area there have been two very
small areas identified with elevated As contents (30-50
mg/kg). These areas cover 500x600 and 1000x300 m.
Therefore, the leakage of the chemical warfare agents
in the location of three shipwrecks is lower than in the
region with scattered objects. Nine samples taken at
certain distances from the shipwrecks contain >100
mg/kg As, and 15 samples contain 50-100 mg/kg As
(Table 3; Fig. 3). Areas with such concentration are not
very big they only cover the square between 100x100
m to 100x500 m.

Concentration of As in sediments in access of
50 mg/kg, i.e. higher than its background values for
pelitic mud in this basin (30 mg/kg), served to us as
a potential indicator of the presence of As containing
chemical warfare agents in the Bornholm Basin.
At small areas in close proximity to the shipwrecks 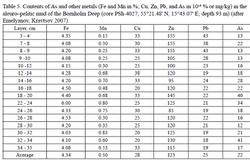 or near any unidentified metallic objects in the very
centre of the Bornholm Basin (within the circle) the
As content is above 50 mg/kg. It most likely depends
on the number and the proximity of sunken objects
with chemical warfare agents or on the place where
any corroded shell, bomb or container might release
chemical warfare agents filling.

At the same time, several samples of sediments
containing elevated As contents (50-100 mg/kg and
higher) were also found outside of CW dumpsite
area–in the location with no chemical warfare agents
containing objects (Emelyanov, Kravtsov 2007). Assessment
of data on As content in the environment of
the Bornholm Basin proved insignificant risk for fish
and its consumption (Sanderson et al. 2008).