Influence of chemical weapons and warfare agents on the metal contents in sediments in the Bornholm Basin, the Baltic Sea

Abstract Large quantities of German trophy chemical weapons (CW)1 were dumped after World War II in
the Bornholm Deep of the Baltic Sea. Four ships wrecks were found on the bottom of the central part of the
Bornholm Deep at depths of 90-100 m. The bottom of the deep is covered by mud with thickness of 1-3 m. The
heavy metal contents (iron, manganese, zinc, copper, cobalt, nickel, chromium, cadmium, lead) and arsenic in the
bottom sediments of chemical weapons dumpsite area were investigated with 378 samples in order to develop
new data assessing the influence of chemical weapons on the environment. The data obtained indicate that an
increased concentration of arsenic (111-277 mg/kg) in the mud of the dumpsite area is related to the chemical
warfare agents, where the corrosion processes of chemical munitions and leakage of arsenic-containing agents
are happening. The arsenic contamination is of local character and is not regarded hazardous for the environment.
In most of the sediment samples outside the chemical weapons dumping area the contents of all the studied
elements are in levels of background concentrations. Seven maps of the distribution of the toxic metals in the
bottom sediments of Bornholm Basin were compiled. The contents of the studied heavy metals decrease in the
direction away from the chemical weapons dumpsite area to the border of the Bornholm Deep. Although the
release of warfare gases from dumped chemical weapons has persisted for many decades, the specific pollution
of sediments is found to be rather small. The prognosis for further degradation from chemical weapons should
exclude catastrophic scenarios.

After the Second World War disposal of chemical
munitions became one of the urgent tasks facing
anti-Hitler alliance. At that time in the same way as
after the First World War the sea dumping was seen
as a most common and reasonable way of chemical
weapons waste disposal. In our research focus is on
the Bornholm Basin which was a main dump site in the
Baltic where according to Final Report of the Working
Group on Dumped Chemical Munitions (HELCOM
1996) 32 000 tonnes of various chemical weapons
(CW) containing about 11 000 tonnes of chemical
warfare agents were dumped into the sea (Table 1).
78
Chemical munitions were delivered by ships and
dumped overboard at the circular dumps site within a
radius of three nautical miles as shown at the navigation
maps (Fig. 1). However according to HELCOM
(1993, 1994) some munitions were discharged out of
the bounds of the prescribed square which resulted in a
much wider actual dumping square within 550 07’–550
26’N and 150 25’–150 55’E, also shown on the maps.
This is the area containing major part of chemical
weapons that had been seized by the soviet troops in
Germany. Weapons from American and British zones
of occupation were dumped outside the Baltic [in
Skagerrak (HELCOM 1996)], in which case it was
predominantly shipboard dumping. Whereas main
environmental threats in Skagerrak are constituted by
concentration in water is not kept over a long period
of time. Due to its accumulation in bottom sediments
and concentration in the vicinity of chemical munitions
sources, arsenic may be regarded as indicator of leakage
of As containing chemical warfare agents to the
marine environment (Emelyanov, Kravtsov 2007).
The main objective of this paper was to study
chemical contamination of bottom sediments in the
Bornholm Basin with toxic agents, i.e. arsenic and
heavy metals (Zn, Cu, Ni, Co, Fe, Mn, Cr, Cd, Pb)
and to establish their spreading in and outside the
dump site which could enable to assess the influence
of dumped chemical munitions and shipwrecks on
marine contamination and locate “hot spots” where
warfare chemical agents are likely to be found for their
subsequent direct examination. In line with these tasks
Table 1. Kind of CW and quantities (in tons) in it of poison materials (HELCOM 1996).
Kind of CW Quantities in it of poison materials

sunken ships loaded with chemical munitions, which
ultimately make a finite number of dangerous objects,
in the case of the Bornholm Basin thousands of various
chemical munitions are resting at certain depth in
the sea mud scattered over a big sea region. It is this
specific character of the Bornholm chemical dumpsite
that underlies our survey and on which our research
methods are based.
Expeditions conducted during 1997–2007 by
P. P. Shirshov Institute of Oceanology of the Russian
Academy of Sciences revealed three shipwrecks in
the dispersed CW dumping area (Gorodnitski, Filin
2002; Paka, Spiridonov 2001, 2002) with one more
ship identified at a later stage, when with the support
of European Commission explorations stepped up to
an international scale. These shipwrecks were repeatedly
examined with remotely operated vehicles (Paka,
Spiridonov 2002) and high resolution sonar (Missiaen,
Feller 2008). Video recording proved the presence of
certain warfare items (artillery shell and aircraft bomb)
on two of them, but these data were not however sufficient
to conclude about the presence of any chemical
munitions in the ship holds. In HELCOM documents
(HELCOM 1996) dumping of CW-containing ships
is only mentioned as unconfirmed evidence. Hence
identification of these shipwrecks at the dumping site
does not answer the question about their relation to the
dumped chemical munitions.
The main dump site (CW) (Fig. 1) is located in
the central part of the Bornholm Basin in water depth
ranging between 70 and 100 m, covered with soft mud
up to two-to-three metres thick being semi-liquid on
top (Emelyanov 2007). Munitions should sink into this
mud which fact is confirmed by numerous evidences
(Missiaen, Feller 2008).
Can CWs be regarded as the source of toxic agents
really hazardous to the marine environment and people?
If the answer is “yes”–how far can these agents be
spread from their source? And what is their concentration
in seabed sediments? Along with many other questions
these issues received either general consideration
(MEDEA 1997) or were specifically examined for
particular dumpsites, which is illustrated in documents
from special conferences held in the Moscow region
(Kaffka 1996), in Gent (Missiaen, Henriet 2002), in
Halifax (2007, no reports published), in Vilnius (2008,
no reports published), in Honolulu (2009, reports published
in special issue of Journal of Marine Technology
Society, 43, 4), as well as in a number of published
research findings (Paka 2004; Emelyanov 2007;
Emelyanov, Kravtsov 2007). However well founded
conclusions and forecasts are unfortunately often difficult
to make due to having no sufficient reliable data
about dumping cases and experimental data about
condition of warfare chemical agents and their actual
effects on different constituents of the ecosystem. With
the support of international project (The European Union
Commission Sixth Framework Programme Priority
Project: Modelling of Ecological Risks related to Sea– 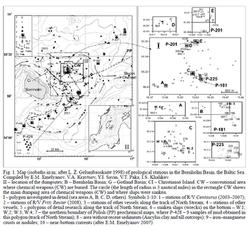 Fig. 1. Map (isobaths in m; after L. Ž. Gelumbauskaitė 1998) of geological stations in the Bornholm Basin, the Baltic Sea.
Compiled by E.M. Emelyanov, V.A. Kravtsov, Y.I. Savin, V.T. Paka, I.S. Khalikov.
II – location of the dumpsites; B – Bornholm Basin; G – Gotland Basin; CI – Christiansö Island. CW – conventional area
where chemical weapons (CW) are buried. The circle (the length of radius is 3 nautical miles) in the rectangle CW shows
the main dumping area of chemical weapons (CW) and where ships were sunken.
I – polygon investigated in detail (sea areas A, B, C, D, others). Symbols 1-10: 1 – stations of R/V Centaurus (2003–2007);
2 – stations of R/V Fritz Reuter (2008); 3 – stations of other vessels along the track of North Stream; 4 – stations of other
vessels; 5 – polygons of detail research along the track of North Stream; 6 – sunken ships (wrecks) on the bottom – W.1;
W.2; W.3; W.4; 7 – the northern boundary of Polish (PP) geochemical maps, where P-428 – 9 samples of mud obtained in
this polygon (track of North Stream); 8 – area without recent sediments (Ancylus clay and till outcrops); 9 – iron–manganese
crusts or nodules; 10 – near-bottom currents (after E.M. Emelyanov 2007).

dumped Chemical Weapons – MERCW, Contract No.
013408) and through cooperation with EMERCOM
of Russian Federation and its partners, it became
possible for the authors of this article in 2006–2008
to take more samples of water and bottom sediments
in the Bornholm CW dumpsite and conduct chemical
analyses (Figs 1, 2). During these expeditions on R/
Vs Professor Shtokman, Centaurus and Fritz Reuter
nearly 400 mud samples have been taken.

Speaking about the analysis of samples presumably
contaminated with toxic agents, it should be mentioned
that there are specific difficulties in the identification
of trace amount of toxic agents and / or their toxic
hydrolysates. Even with very high resolution mass–
spectrometer identification of toxic agents should be
based on their reference samples, which the authors did
not have. Main focus hence was made on arsenic (As),
which is contained in a number of toxic agents and may
be found in sediments at considerably low background
level (up to 1 mg/kg). In the South Baltic its average
content in sediments is about 5 to 20 mg/kg As.
Arsenic is contained in the following chemical
warfare agents: diphenylarsine chloride (Clark
I (Ph2AsCl)), diphenylarsine cyanide (Clark II),
phenarsazine chloride (adamsite) (Ph2As(NH2)Cl),
2-chlorovinyldichloroarsine (lewisite) (C2H2AsCl3),
diphenylarsine dichloride (PhAs2Cl2) and arsenic
butter, as well as industrial mixture of arsenic (III)
chloride 5%, diphenylarsine dichloride 50%, Clark I
35% and triphenylarsine 5%. Arsenic butter was used
in mixtures with bis (2-chloroethyl) sulphide (Franke
1976; Kopecz 1996).
As it is commonly known the major part of shells
and bombs caught by fishermen in the Bornholm Basin,
is heavily corroded (HELCOM 1996). Leakage of
bombs and shells on the sea bottom causes continuous
supply of toxic agents to marine environment. Behaviour
of such toxic agents in marine environment depends
on their physical–chemical properties and such
environmental conditions as temperature, salinity, Eh
and pH values, as well as diffusion rate and advection
by bottom currents. Warfare chemical agents are for
the most part poorly soluble in water; with time however
they start to dissolve and decompose – quicker
or slowly. This results in release of toxic components
into the marine environment. However their elevated
80
we provided available data about specific conditions
in which leakage of CW casings is happening with
subsequent release and decomposition of warfare
chemical agents.