Revealing the hydrate formation process at the water-CO2 interface

Water can form solid clathrate phases in the presence of small molecules. These so called hydrates are crystalline inclusion compounds where guest molecules, mainly gases, are trapped in an ice-like network of nanometre-sized cages. Methane hydrate is of special importance as it occurs in huge amounts in the sediments of deep sea regions. In recent years hydrates have attracted general interest because of a rising number of possible applications, e.g. mining of methane from the ocean floor or the storage of CO2 or H2. Thus, for such applications, knowledge of the fundamental processes involved is essential in order to control -inhibit or initiatehydrate formation. In general, two kinds of model exist describing the formation of hydrates at the molecular level. While cluster models such as the cluster nucleation theory [1] predict hydrate precursors forming around dissolved guest molecules, in stochastic models, like the local structuring hypothesis [2], the hydrate formation happens without such precursors. The difference between the two models is illustrated schematically in Figure 40. 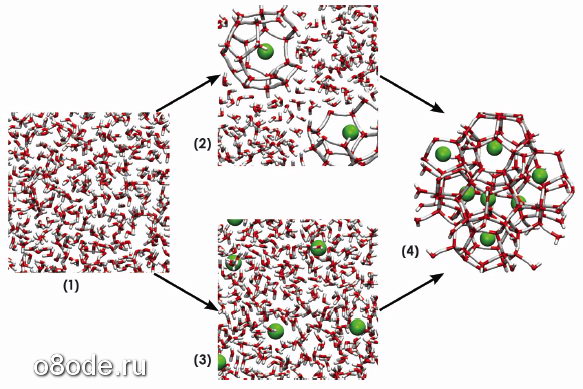 Initial hydrate formation occurs mainly at the water surface owing to the large number of gas molecules present. Therefore, we studied the liquid-gas water-CO2 interface by means of X-ray reflectivity measurements. This method is highly sensitive to the structural properties of the sample’s surface. In particular, its surface roughness and the formation of layers can be analysed with sub-angstrom resolution. Most importantly, the formation of hydrate precursors or a thin hydrate layer would result in changes to the surface roughness or the formation of a surface layer. As CO2 hydrate is stable at pressures above 12.5 bar at 0.1°C, a special stainless steel pressure cell with aluminium windows was used for this experiment making the use of high energy X-rays essential. X-ray reflectivity measurements of the water-CO2 interface were performed using the setup for scattering from liquid surfaces at beamline ID15A at T = 0.1°C and pressures between 1 bar and close to the condensation pressure of CO2 at 35 bar.

In Figure 41a selected reflectivity curves at various CO2 pressures normalised to the Fresnel reflectivity of a bare water surface are shown. The Kiessig fringes at higher pressures indicate the formation of a layer on the water surface whose thickness increases with increasing gas pressure. For all pressures, the water’s roughness remained constant at the expected value for capillary-wave roughness of 3.2 ± 0.1 Å. From the reflectivity data, electron density profiles were obtained, as shown in Figure 41b. The layer’s electron density also remains constant at the value of liquid CO2. In contrast, CO2 hydrate would have an electron density which is approximately 30% above the measured value. Hence, owing to the constant water roughness and the agreement of the layer’s electron density with liquid CO2, the adsorption of CO2 on the water surface without formation of hydrate or hydrate precursors was observed. This is supported by a further analysis of the layer’s structural properties which agree well with adsorption and capillary wave theory for thin liquid films [3]. 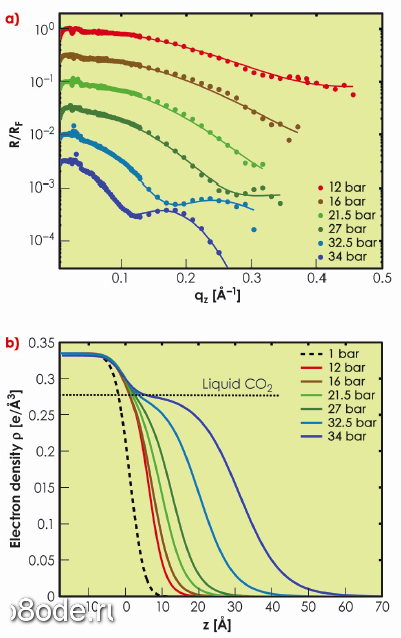 Fig. 41: a) X-ray reflectivity curves normalised to Fresnel reflectivity for different gas pressures. The solid lines are fits to the data, curves are shifted for clarity. b) Electron density profiles of the water-CO2 interface at different pressures. The density of liquid CO2 is marked by the dashed line.

In contrast to the liquid-gas interface, X-ray diffraction measurements at the liquid-liquid interface between bulk water and bulk CO2 performed at beamline ID15A exhibit the formation of small hydrate crystallites [4]. Bragg reflections originating from these crystallites appear and disappear continuously suggesting a fully stochastic formation of mobile hydrate crystallites. Thus, the two interfaces show very different behaviour with respect to gas hydrate formation. The adsorption of CO2 on the water surface leads to an abundant supply of guest molecules, but does not trigger the hydrate formation process. This happens only in the presence of a macroscopic liquid layer. These findings, i.e. the stochastic nature of crystallite formation and the absence of surface covering hydrate precursors, imply that a stochastic hydrate formation model such as the local structuring hypothesis is favoured by our study.