“Informationability” of Water and Origin of Living Matter Bioresonance Effects

Water is the foundation of life. It is still a mystery for science how non-living matter transformed into a living one. New properties of water have to be studied, though it seems like we know all about it already.

In March 2004 an American space probe found “traces’ of water on Mars and salt in a dried up lake.

Scientists can already presume that perhaps there has been and still is life on this planet.

In July 2005 the American space apparatus “Deep Impact” shot a projectile in the Temple 1 comet. The basic module was at a significant distance and effected monitoring about the consequences of the collision by analyzing the chemical composition and structure of the comet’s nucleus. The results will allow the evaluation of the internal composition of the comet. This will help humanity solve the puzzle about the origin of the Solar system and the origination of living matter. American scientists have monitored three sections covered with ice in a small zone on the surface of the comet’s nucleus. According to scientific opinion, water that has transformed into ice contains many admixtures. It is presumed that a much larger quantity of ice is contained in the nucleus. Scientists have long reached the conclusion that comets are fragments from the formation of the Solar system 4,6 billion years ago.

In August 2008 Nasa’s Phoenix lander spacecraft has for the first time identified water in a sample of soil collected from the planet’s surface.

„This is the first time Martian water has been touched and tested”, William Boyton one of the researchers on the mission, explained.

Scientists are more and more convinced that the availability of water on space objects is more a rule, than an exception. The paradigm of public thinking with regard to the properties of water is also changing.

In January 2009 Dr. Michael Mumma from NASA announced that there are three areas on Mars, which slowly release significant quantities of methane. All three areas bear traces of the availability of a lot of land ice or running water.

The methane columns in the Martian atmosphere prove to scientists that probably there exist living microbes under the surface of the planets. According to the scientists, there is no data that methane has been brought to the planet by a celestial body, for example, a comet. There is no evidence that the gas is a product of volcanic activity, for example the presence of sulphur dioxide. According to researchers, if methane originates from microbes, they probably live deep under the lifeless Martian surface - at a depth where it is sufficiently warm so that liquefied water could exist. 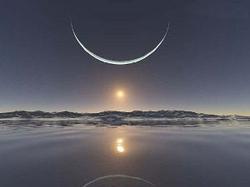 Sunset, Moon observed from the
North Pole of the Earth, 2009

NASA announced on November 14, 2009, that a "significant quantity" of frozen water was found on the Moon. The probe has detected the presence of water in a constantly eclipsed lunar crater. "The discovery opens a new chapter in our understanding of the Moon, scientists from the U.S. space agency reported. The new data was received after NASA sent two space shuttles, which were wrecked on the lunar surface in October 2009 in an attempt to detect water. Previously, scientists supported the theory that, besides the possibility of the existence of ice at the bottom of craters, the Moon was totally dry.

Beyond the facts, let's look at the discovery from the position of biophysics. The average distance from the Earth to the Moon is 384 400 km. Indeed, this scientific achievement overturns the paradigm for the presence of water in the Solar system. Both Moon and Earth are practically the same distance from the Sun. The discovery of American scientists will help us to appreciate better the factors that contribute to the emergence of living matter. 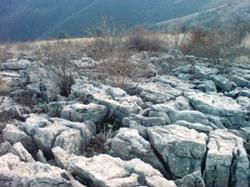 Maybe this is how the world on another planet looks like,
peak Petrahelios, Teteven, Bulgaria,
photo Alexander Ignatov

In 2001 scientists from the scientific and research center IMSat NASA and the University of Santa Cruz, California, conducted an experiment close to the conditions of the young Solar system.

The mixture was irradiated with an ultraviolet light of the same wavelength that has existed in the dense molecular cloud from which the Solar system was structured. Organic molecules were formed. In this mixture self-organizing structures with dimensions of 10 µm were found. By their form they are bubbles resembling cells. 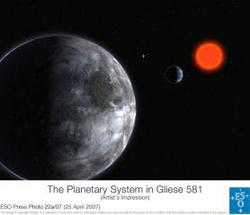 The planet Gliese 581 C orbits the faint red star Gliese 581, which is 20.5 light-years away in the constellation Libra.

The scholars Udry and Mayor of the Geneva Observatory say the benign temperatures on the planet mean any water there could exist in liquid form, and this raises the chances it could also harbour life.

"We have estimated that the mean temperature of this 'super-Earth' lies between 0 and 40 ° С, and water would thus be liquid," explained Udry, lead author of the scientific report reporting the result.

Moreover, Gliese 581 C radius should be only 1.5 times the Earth's radius, and models predict that the planet should be either rocky - like our Earth - or covered with oceans."

Delfosse from Grenoble University, added: "Liquid water is critical condition to life as we know it."

The observatories would seek to identify trace atmospheric gases such as methane, and even markers for chlorophyll, the pigment in Earth plants that plays a substantional role in photosynthesis.

My opinion is that it is absolutely possible for the “bio computer” water with its “memory” and substances with a efforts of nature “forces” to create „living” water and in this water -living cells on the planet Gliese 581 C. 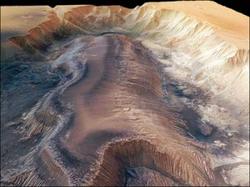 With the origination and evolution of living matter, the water molecules, the cells and the tissues exchange biophysical fields among them. Depending on the energy status, the energy from the environment is either received in the living organisms (“give”mode) or is lost (“take” mode) (Dr. Ignatov, Antonov,Galabova, 1998). The same authors prove that in“give” and “take” mode an energy redistribution is effected between water molecules. The duration of the information stored is four months.

There exist interesting proof already that several molecules from a certain substance can significantly change the structure of water clusters. Homeopathy is a classical example for this. Experiments were conducted under the leadership of the eminent French immunologist Benveniste. The homeopathic principle was reproduced on biological models. When to one of the immune cells types in man specific antibodies interacting with them were added, a cell reaction was observed. Upon decrease of the concentration of the antibodies in some dilutions, an effect was observed, and in other cases – it disappeared. Such an alteration of biological activity of “solutions” was also observed in concentrations when the probability of the presence of even one protein molecule was only slight. The authors presumed that the transfer of biological information was due to the “memory” of water.

Yet what is the probability for a formation of water clusters, micro elements and additional conditions to create organic molecules, and,subsequently, living cells. Lets look at the smallest living cells. The smallest bacterium Micrococcus progrediens is 0,1 µm in diameter. The myco plasma is also 0,1 µm. This means that these cells are 1000 larger in diameter than the hydrogen atom. The myco plasma has the requisite macro molecules for the existence of a living cell. The interesting thing for it is that it has a flexible membrane, not a solid one, like the other cells. The myco plasma reproduces through the formation of coccus-like structures or division. The electric properties of the membrane, which is 0,1 µm wide, do not differ from those of the remaining cells.

The structure of clusters of water molecules with dimensions 1,1 µm / 1,1 µm / 203 Å is stable regarding the effectuation of biological processes. (Zenin, 2002).

Defrosted water is exceptionally “active”. In spring, an increase of the amplitudes in the spectrum of water,measured through the DNES method is observed. In this season birds and animals drink water from defrosted ice. Plants also grow quickly from this water. Defrosted water has a stimulating effect and is used successfully for the convalescence of diseased people after an operation. Scientists from the Royal Medical Institute in Stockholm report of a successful treatment of diabetes with defrosted water. The healing properties of defrosted water are due not only to the more “active” spectrum, but also to the element deuterium. The water molecules in which the hydrogen atoms are from the deuterium isotope have difficulty passing through the cellular membrane. Marinov reported of a quick growth of flowers in Siberia. Together with Russian scientists in the 70ies, he proved that the water in the region contained less deuterium. Experiments were conducted proving “activation” of the spectrum of water, which is frosted after bioinfluence in “give” mode and defrosted before the spectral analysis.

Evidence states that the origin of life depends on the qualities and structure of water as well as on additional circumstances. Mineral water interacting with calcium carbonate comes closest to these circumstances and has left a trace in plants with its structure and entropy. Next come sea water and mountain water (Ignatov, 2010). In warm and hot mineral waters the peaks in the differential non-equilibrium energy spectrum DNES (Antonov, 1993) are more pronounced in comparison to the peaks in the same water with a lower temperature. This signifies that there is more energy for the preservation of a self-organized structure. The spectral range of DNES is in the middle infrared range from 8 to 14 micrometers. There is the earth atmosphere’s window of transparency for the electromagnetic radiation in the close and middle infrared range. In this interval energy is radiated from the Sun towards the Earth, and from the Earth towards surrounding space. Water changes with a cosmic rhythm. 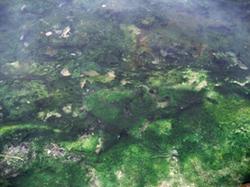 The likelihood of origination of life is biggest in warm and hot water water with a specific structure (Ignatov, 2009, 2010). In January 2010, American scientist David Ward and colleagues described fossilized stromatolites in the Glacier National Park in the USA. They are studying microbes in Yellowstone National Park in USA, which are building stromatolites in hot water similar like ancient organisms. Rotorua in New Zealand is a similar place. Stromatolites were lived in hot water in the zone of volcanic activity. The warm and hot water can be heats from magma. Their age is 3.5 billion years. These are the first organisms with fossil evidence. This is a confirmation and of the concept based on biophysical analyses for origination of life in warm and hot mineral waters and geysers (Ignatov, 2009, 2010). In June 2010, an article with this evidence was published at an Euromedica congress in Hanover, Germany. In common parlance, the Russian scientist Mosin calls the analyses “Water for the Origination of Life.” In September 2010, the American scientists Stockbridge, Lewis, Yung Yuan and Wolfenden published an article with the popular title “Is the Origin of Life in Hot Water?” They consider the probability of faster biochemical reactions in warm hotwater. Mosin thinks that in the beginning of evolution there was much more deuterium in water and this is a significant fact regarding its information abilities about the preservation of life.

In September 2011 a team of Japanese scientists led by Tadashi Sugawara also brought us closer to the secret that life has originated in warm or, more likely, hot water. They have created a proto cells, witch are similar of bubbles. For this purpose, they have made an aqueous solution of organic molecules, DNA and synthetic enzymes. The solution was heated to a temperature close to water’s boiling point – 95 degrees. Then its temperature was lowered to 65 degrees. A formation of a proto cells wits membrane was also observed. These proto cells are multiplying. This is a step for creation of synthetic cell. This laboratory experiment is an excellent confirmation of the possibility that life hasoriginated in hot water (Ignatov, 2010), (Ward, 2010). Upon changing the temperature is changing the middle energy of hydrogen bonds among water molecules, as an information bearer of life. (Ignatov, Antonov, 1998).