Chemists have long recognized water as a substance having unusual and unique properties that one would not at first sight expect from a small molecule having the formula H2O. It is generally agreed that the special properties of water stem from the tendency of its molecules to associate, forming short-lived and ever-changing polymeric units that are sometimes described as "clusters". These clusters are more conceptual than physical in nature; they have no directly observable properties, and their transient existence (on the order of picoseconds) does not support an earlier view that water is a mixture of polymers (H2O)n in which n can have a variety of values. Instead, the currently favored model of water is one of a loosely connected network that might best be described as one huge "cluster" whose internal connections are continually undergoing rearrangement. 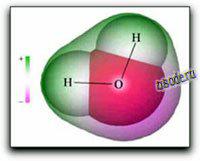 Water has long been known to exhibit many physical properties that distinguish it from other small molecules of comparable mass. Chemists refer to these as the "anomalous" properties of water, but they are by no means mysterious; all are entirely predictable consequences of the way the size and nuclear charge of the oxygen atom conspire to distort the electronic charge clouds of the atoms of other elements when these are chemically bonded to the oxygen.

A covalent chemical bond consists of a pair of electrons shared between two atoms. In the water molecule H2O, the single electron of each H is shared with one of the six outer-shell electrons of the oxygen, leaving four electrons, which are organized, into two non-bonding pairs. Thus the oxygen atom is surrounded by four electron pairs that would ordinarily tend to arrange themselves as far from each other as possible in order to minimize repulsions between these clouds of negative charge. This would ordinarily result in a tetrahedral geometry in which the angle between electron pairs (and therefore the H-O-H bond angle) is 109°. However, because the two non-bonding pairs remain closer to the oxygen atom, these exert a stronger repulsion against the two covalent bonding pairs, effectively pushing the two hydrogen atoms closer together. The result is a distorted tetrahedral arrangement in which the H—O—H angle is actually 104.5°. 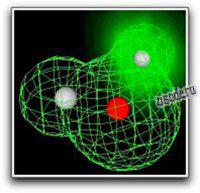 Because molecules are smaller than light waves, they cannot be observed directly, and must be "visualized" by alternative means. The two computer-generated images of the H2O molecule shown on the right and below come from calculations that model the electron distribution in molecules. The outer envelopes show the effective "surface" of the molecule as defined by the extent of the electron cloud

The H2O molecule is electrically neutral, but the positive and negative charges are not distributed uniformly. This is shown clearly by the gradation in color from green to purple in the image at the above right, and in the schematic diagram to the left. The electronic (negative) charge is concentrated at the oxygen end of the molecule, partly because of the nonbonding electrons (solid blue-gray circles), and to oxygen's high nuclear charge that exerts stronger attractions on the electrons. This charge displacement constitutes an electric dipole, represented by the red arrow at the bottom of the picture below. You can think of this dipole as the electrical "image" of a water molecule.

As we all learned in school, opposite charges attract, so the partially positive hydrogen atom on one water molecule is electrostatically attracted to the partially negative oxygen on a neighboring molecule. This process is called (somewhat misleadingly) hydrogen bonding. Notice that the hydrogen bond (shown by the dashed blue line) is somewhat longer (117 pm) than the covalent O—H bond (99 pm). This means that it is considerably weaker. It is so weak, in fact that any hydrogen bond between water molecules cannot survive for more than a tiny fraction of a second. This is an important thing to understand, especially as we discuss water “clusters” in greater detail.

How chemists “think” about water:

The nature of liquid water and how the H2O molecules within it are organized and interact are questions that have attracted the interest of chemists for many years. There is probably no liquid that has received more intensive study, and there is now a huge amount literature on this subject.

H2O molecules attract each other through the special type of dipole-dipole interaction known as hydrogen bonding.

A hydrogen-bonded cluster in which four H2Os are located at the corners of an imaginary tetrahedron is an especially favorable (low-potential energy) configuration, but...

These molecules undergo rapid thermal motions on a time scale of picoseconds (10–12 second), so that the lifetime of any specific clustered configuration of water will be fleetingly brief!

A variety of techniques, including infrared absorption, neutron scattering, and nuclear magnetic resonance, have been used to probe the microscopic structure of water. The information compiled from these experiments and from theoretical calculations has led to the development of around twenty different "models" that attempt to explain the structure and the behavior of water. More recently, computer simulations of various kinds have been employed to explore how well these models are able to predict the observed physical properties of water.

This work has led to a gradual refinement of our views about the structure of liquid water, but it has not produced any definitive answer. There are several reasons for this. The principal conclusion is that the very concept of "structure" (and of water "clusters") depends on both the time frame and volume under consideration. Thus questions of the following kinds still challenge scientists:

How do you distinguish the members of a "cluster" from adjacent molecules that are not in that cluster?

Since individual hydrogen bonds are continually breaking and re-forming on a picosecond’s time scale, do water clusters have any meaningful existence over longer periods of time? In other words, clusters are transient, whereas "structure" implies a molecular arrangement that is more enduring.

Can we then legitimately use the term "clusters" in describing the structure of water?

The possible locations of neighboring molecules around a given H2O are limited by energetic and geometric considerations, thus giving rise to a certain amount of "structure" within any small volume element. It is not clear, however, to what extent these structures interact as the size of the volume element is enlarged.

As mentioned above, to what extent are these structures maintained for periods longer than a few picoseconds?