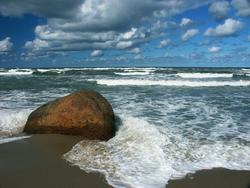 Abstract Large quantities of German trophy chemical weapons (CW)1 were dumped after World War II in the Bornholm Deep of the Baltic Sea. Four ships wrecks were found on the bottom of the central part of the Bornholm Deep at depths of 90-100 m.